As of 2019 October 1, two long-time lawyers Justinas Jarusevičius and Rimantas Daujotas have been promoted to dispute resolution partners of Motieka & Audzevičius. Until now partners of the firm were attorneys Kazimieras Motieka, Ramūnas Audzevičius, Giedrius Kolesnikovas and Jovitas Elzbergas.

“The new partners have achieved crucial victories in complex international disputes, and both are unique in terms of their work and academic development. Justinas, who joined the litigation team in 2008, is today the only New York attorney licensed in the Baltics, awarded a master‘s degree at Harvard Law School. Clients value Justinas‘ experience in damage litigation. Rimantas has been with the firm since 2011 and represents clients in high-value international arbitrations. In addition to his intensive work, he was able to obtain two doctoral degrees in Law, one in Vilnius and the other in London, and continues studies in Harvard and Cambridge. Obviously, together with our new partners, we are also growing as a law firm,” said partner Ramūnas Audzevičius.

The new partners specialize in dispute resolution practice. According to J. Jarusevičius, the increase in the number of dispute resolution partners will allow them to share responsibilities, increase visibility and encourage the team to deal with even more complex cases both in Lithuania and abroad. “A long-term goal of the law firm‘s dispute resolution team is to be the first choice in the event of a complex legal dispute. Business litigation is continuously becoming more complex, it involves many jurisdictions and fields of law. The value of claims is also increasing, therefore, only by strengthening our dispute resolution practice we will be able to facilitate our continuous protection of clients’ interests in a professional and effective manner,” added R. Daujotas.

Last time in 2010, Giedrius Kolesnikovas, Head of Corporate Law Practice Group, added to the partners of “Motieka & Audzevičius”. During that period, the firm’s team grew from 27 to 47 employees. While the new partners are joining the dispute resolution team, according to partner Giedrius Kolesnikovas, this is not the only area to be strengthened. According to G. Kolesnikovas, “The corporate law team is also constantly growing in the number of specialists and their competencies. The lawyers who joined the team this year, had previously worked for institutions dealing with the surveillance of the financial market, were specializing in the provision of other corporate law services. They have contributed with their knowledge to a team that keeps an increasingly strong position in the market, and I think this year we will definitely have a lot of news related specifically to this area of practice.” 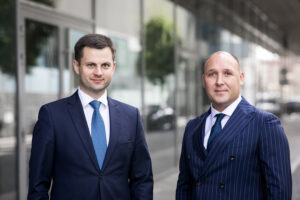